Walks between railway stations can be dictated by various elements, including the prevailing gradient, where the sun is likely to be all day, the opening hours of pubs en route and whether paths can be more easily picked up in one direction than the other. In the case of this little walk, the main thing dictating walk direction is the balance of train services. Romsey has a half-hourly service to Southampton on one hand and Salisbury on the other all week; Mottisfont & Dunbridge has a train every hour Mondays to Saturdays and a train every two hours on Sundays.

This guide is therefore the wrong way round. Turn your screen upside down to do the walk in reverse.

Romsey is a pleasant station to start from. It has platform awnings on both sides for piling off the train in the rain and discussing whether to cancel the walk under; it also retains its listed Classical station building in apparently good condition, although a brief examination will reveal that it is in fact discretely boarded-up using black plywood with white stripes painted across it. 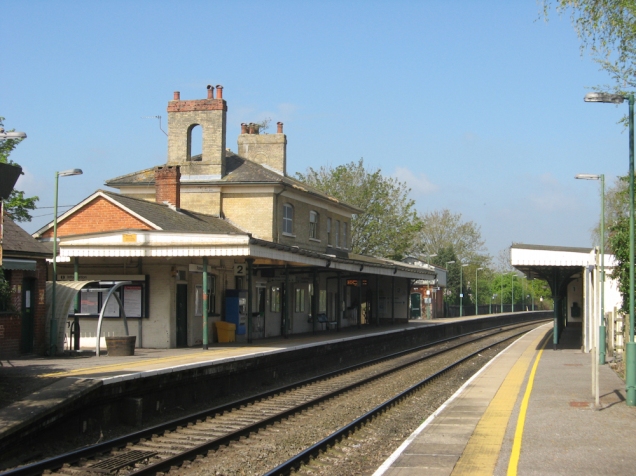 Exits are available on both sides. From platform 1, head straight down the exit ramp at the back of the station to a lane emerging from a cattle creep under the railway north of the buildings. Those arriving on platform 2 need to get under the railway, either using the official subway or via the cattle creep. Having got to the east end of this cattle creep, follow the lane away from it to the Romsey Canal and turn North.

This has an air of the back end of Romsey’s more comfortable suburbs (actually most of Romsey is on this side of the railway and the canal goes through the middle). For a little way it is a tarmaced towpath besides a lightly overgrown non-navigable canal, populated by runners and dog walkers. It then strikes out of town, losing tarmac and houses. Water meadows abound on one side; woods feature on the other. The path slowly dwindles in quality. All is very restful. 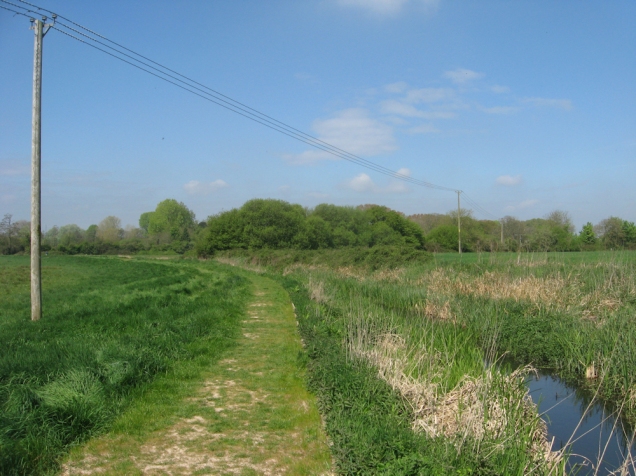 After working through the woods, the canal comes out into open country and swings across a couple of fields, where someone has made sporadic attempts to upgrade the surface. On a nice day it is rather pleasant that these have not been wholly completed. The canal has, like the path, become progressively less passable.

It abruptly and inconsiderately dies, along with the path, on hitting the A3057. This is not exceptionally busy by the standards of single-carriageway “A” roads, but it still has a fair bit of traffic, no pavement and a need to be followed for 200 yards or so to the right before taking another right turn through a discreet kissing gate. Follow the remains of the hedge across the field to the next road, reflecting on how very “Thelwell Country” the landscape hereabouts is.

Turn left on reaching the lane (which has a pavement – mostly) and follow it back to the A3057 (which also now has a pavement). Turn right and enter Timsbury. Follow the road to the large lay-by with a bus stop at the north end adjacent to the village hall; then cross the road (admittedly easier said than done for a fairly minor deviation; turning right here up the hill and left at the top avoids two road crossings, a church and more of the A3057) and drop down the lane towards Timsbury Manor and the church. Turn right at the end for the church and follow this lane to the church itself, which is a neat little structure in stone with a wooden bell turret. The surroundings (particularly the car park) do not quite set it to best advantage. It is 13th Century in origin, but much rebuilt.

Beyond is a proud set of gates protecting “Herons Mead”, which house (and lake) is carefully hidden by several trees. Its development is described in Thelwell’s A Plank Bridge by a Pool (which is strikingly tender compared to Thelwell’s cartoons). The owners have quite enough Thelwell lovers leaning over for photos, so there is no need to add to the number. Instead follow the footpath around to the right, along the back and then diagonally across a field back to the road.

Continue along the main road to the next road on the right, which leads neatly up through a varied array of houses to Michelmersh. The rectory at the top of the hill is a splendidly grand brick structure. Turn left, rejoining the Timsbury Church-avoiding diversion, and continue climbing, following Haccups Lane and discretely admiring the architecture of the modern mansions on the right. At the T-junction at the end turn right.

The lane then swings round a leftward curve to end at a fork. Mottisfont is to the left, down the hill, but a short diversion to the right will take in Michelmersh’s 12th Century church. It is an ordinary enough church in floorplan, but the flint-walled church body combined with a weatherboard tower is less common. It is also much better situated than Timsbury’s, being on top of the hill with views of the Test Valley.

Return to the previous junction and fork down the hill, enjoying the quiet of the road, its easy, swinging route and the views across the Test towards Mottisfont.

At the bottom of the hill, recross the A3057, drop down the path through the hedge and turn left along the cyclepath to the road junction. Here turn right and follow the lane towards Mottisfont past the old “Sprat & Winkle Line” Mottisfont station. (The Sprat & Winkle was an informal nickname after the fish and the water mollusc. It went up the Test Valley to Andover.)

The lane runs straight through a wood and then crosses the Test into the water meadows around Mottisfont Abbey. Several signs around the river crossing inform passers-by that they are being Watched. Beyond the unbreaking surveillance protecting against theft of this bridge is a slightly wider section of road running a little above the plain between iron fences. The Abbey and associated gardens are owned by the National Trust; more Northanger than Tintern, they present a few delightful sightings through the hedge from the passing road and are also responsible for a fair chunk of the traffic that negotiates this lane.

Pass the Abbey entrance (unless wishing to stop off here) and head into Mottisfont proper. At the top of a slight hill the road turns right. Continue straight on and follow round to the left, past a Millenium Orchard, and then back round to the right through a gate. Follow this lane gently up the hill for a few hundred yards and then turn left down the footpath.

The usual process for crossing arable fields is to wade through the crop, using rights as a person in the successor lands to the Kingdom of Mercia to follow the assumed route of rights of way until the actual one is found again, or (failing that) walk round the edge. At Mottisfont the farmer decries the practice of walking round the edge and has (wonder of wonders) kept the Public Right of Way clear across the field. This is to be much praised, allowing walkers to navigate the oilseed rape unencumbered by its enthusiastic attitude for overpopulation. At the other end of the field, pass through the kissing gate, note the buildings of Mottisfont & Dunbridge station off to the left and strike down through the cow field towards the road. On reaching the road, turn left to reach the station.

Access between platforms here is provided by the half-barrier level crossing at the northern end of the station. The station building, which is typical London & South Western in design, survives in private ownership. A pub on the northbound (platform 2) side provides a form of waiting room. Other shelter is utilitarian, consisting of the old building’s diminutive awning on platform 1 and a verdigris-covered plastic shelter on platform 2. The station is operated by Great Western Railway, but none of their trains stop here nowadays so the timetable is branded with “South West Trains” and waits are interspersed by (largely 3-car) green units shooting past amidst crossing sirens. Dunbridge, which is barely larger than its station, is not the most attractive of places. Still, this means that peaceful summer afternoon waits for a train home are unlikely to be disturbed by other passengers.

Back in 2015, with an Interesting Election upcoming, I did several blogposts on policies, polls and likely outcomes.

This time the British election looks set to be rather more boring – there’s only so much fun to be had in watching a party react to predictions that it’s going to be reduced to 200 seats that would mostly vote for a baboon if it was wearing a red rosette – and the French one is frankly not much better. (Le Pen is not going to win unless a) Macron implodes and leaves everyone with the exciting question of the semi-fascist or the man you’ve just decided is going to destroy the country, b) someone manages to whip up a campaign that you have to vote for Le Pen if you’re inclusive because she’s a woman or c) everyone who gets polled is worried the pollster will think they’re a racist if they say Le Pen and they’re all saving their actual opinions for the ballot box.)

So this year I’m going to distract from it and write some posts about walks that should be possible to do from the train instead.

Railway-based walks are much more interesting than car-based ones because of the lack of obligation to return to where you started.

The aim will be to provide some ideas for routes with a mix of landscapes, gradients, lengths and areas, largely avoiding dusty roadsides and miles of flat muddy fields.

I was going to call it “Trails from the Track” and then remembered where I found that term in the first place. (Okay, I didn’t remember per se. I remembered it might be out there somewhere and Googled it. Turns out it’s a publication from the Devon & Cornwall Rail Partnership which I don’t own a copy of because, perhaps oddly for someone writing a series of walk guides, I prefer to eschew walk guides and design my own walks.)

“Trails from Rails” is a search term for putting multi-use non-car routes on old railway lines. This series is an attempt to reclaim the term for a more positive approach. Readers of certain webpages on the Wye Valley Railway will already know my editorial line on such schemes – I am, after all, a rail lobbyist – and will be unsurprised at the absence of such routes from the ensuing series of walks.

Along the way there may be a sudden interruption with a post about why the rail network should be privatised. To avoid this lessening your enjoyment of this politics-free zone, please feel free to ignore it until after the election. (Unless you were planning to vote for a baboon with a red rosette, in which case it will explain why retaining UK Rail under the control of public organisations may cause long-term fare increases, rising costs and poorer service. Owing to a degree of laziness and procrastination, the appearance of this post – ever – is not guaranteed.)

Here is a nice picture to get us started:

The Order of the Bed

Posts of Some Note